Having received my diagnosis, I was told that I’d be starting chemotherapy for bowel cancer quite quickly. And quite quickly, it was. I was in front of my oncologist just 8 days later.

The meeting with the oncologist was made that much easier because the lead colorectal cancer nurse specialist, who had been with me since my colonoscopy, was also there. This continuity of personnel made me feel so much more comfortable about what was happening to me. I can’t express my gratitude enough.

The oncologist starting telling me about my treatment plan but I lost track of what she was saying, for a while, because of the first thing she said. She said that I was being treated as curative. To actually hear that said was such a relief, I can’t really describe it. It turns out you can feel shocked from hearing good news too…

As the tumours on my liver were in operable locations, the plan was as follows:

I needed two surgeries because bowel surgery and liver surgery are different specialties. The bowel surgeons were based in Taunton but the liver surgeons were in Bristol. The order of the surgeries was yet to be decided but, it seemed to me, that shifting the primary tumour first, made sense. Especially as it was spitting out liver metastases. So, I figured I’d be operated on in Taunton first.

But, before I could even consider being gutted like a fish, there was starting chemotherapy for bowel cancer to contend with…

My follow-up letter, from the meeting with the oncologist, explained that my chemotherapy would be, in the first instance, ‘neoadjuvant chemotherapy with 4 cycles of 3 weekly Oxaliplatin and Capecitabine.’

Neoadjuvant, in this context, refers to a therapy used before the main treatment. In this instance, the hope was that the chemotherapy would shrink the tumours to make them easier to remove surgically.

This is an important point, that would take me quite a while to get straight in my head, so I’ll emphasise it here.

Chemotherapy isn’t expected to clear a body of cancer. Surgery is. Chemotherapy is used to help tidy up and, ideally, make the surgery more effective.

The final important thing to understand about chemotherapy is how it works. It’s very far from a targeted therapy; more of a shotgun approach, than anything. The idea is that, while it’s killing all of you, it’s killing the cancer the fastest. 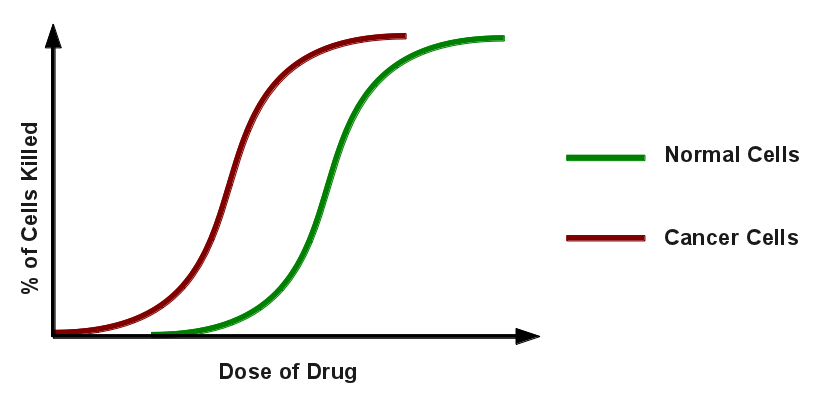 I found myself starting chemotherapy for bowel cancer exactly two weeks after my meeting with the oncologist. And almost exactly two months after I was told I had bowel cancer, during the colonoscopy. While it felt like it was taking forever, at the time, that is amazingly fast, really.

The NHS is an amazing thing, staffed by wonderful people. Without it, and them, I’d be long gone. So I just thought I’d take this opportunity to say, thanks. 🙂

The first part of the starting chemotherapy for bowel cancer process is a blood test. This is an important step because markers in your blood need to be above certain levels or the drugs can’t be administered. It’s also a part of the process that I never really got on top of. Here’s the problem: the lab needs a day to analyse the blood, so you can’t have the samples taken on the same day. AND, the samples need to be fresh enough to be relevant, which means they can’t be more than two days old.

This leaves a 2-day window in which to get the blood samples taken. I could have it done at the hospital, but that was right over the other side of town, or I could have it done at my GP’s surgery, which was very close by. But the GP’s surgery needed plenty of advance notice, to guarantee a slot, but didn’t allow booking too far in advance. There was also limited availability over the weekend, which made Monday sessions even more tricky. Samples taken on Friday were out of date.

Anyway, my point is; sort out a system for this early on. Don’t be like me and shamble your way through it every single time!

For me, starting chemotherapy for bowel cancer took place at the Beacon Centre, at Musgrove Park Hospital as part of the Haematology, Oncology and Palliative Care (HOPE) services offered there. The Day Unit, where I’d be treated, had a number of communal areas, where 6-8 patients could be treated at a time. 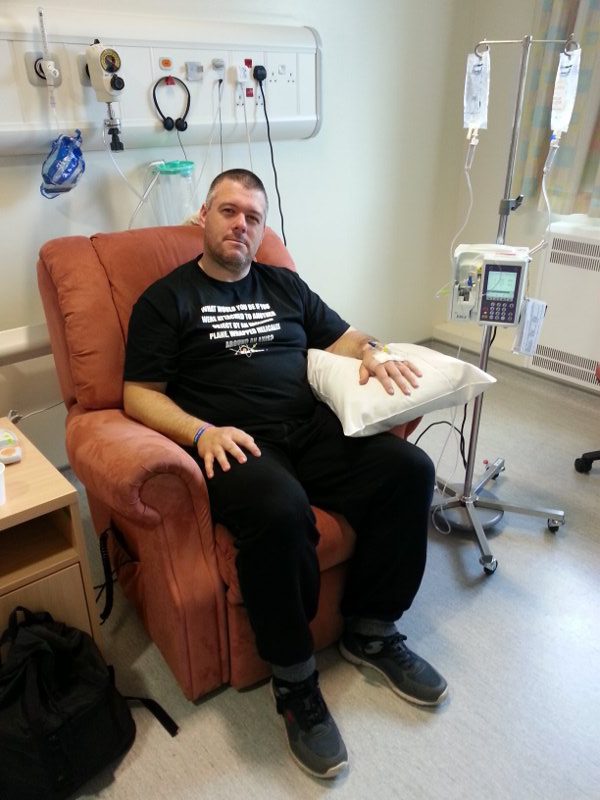 Me starting chemotherapy for bowel cancer

However, because it was my very first session, I was taken into one of the side rooms, where patients were treated one at a time. This was quite a relief because no one ever wants to look like a noob but, more than that, I didn’t want to do anything that might distress people who might be considerably sicker than I was. So, the side room was good.

Before the nurses hooked me up, they took their time explaining everything to me and made sure I understood, before moving on. The next thing that happened was that I was presented with a big paper bag of the medications I’d need over the next two weeks.

In terms of chemotherapy treatments, the I.V. aspect in the hospital is often the least part of it. Most of it is the medications you take home with you. You’d think that the big bag of drugs would’ve made that clear. But it didn’t. It’d all become clear later, though. Oh, yes!

But, for now, a surprisingly small cannula was put in the back of my hand and I was given my Chemotherapy Patient Held Record booklet. This was my record of the treatment and I was allowed to take it home with me, although that did mean I’d have to remember to bring it every time.

I was then hooked up to the first of three bags of IV Oxilaplatin and given a pot of anti sickness tablets to swallow. Each of the three bags would take 40 minutes and then there would be a flush at the end, which would be another 20 minutes, or so. The flush was a saline solution and it was simply to make sure that none of the medication was left in the lines. But was, instead, in me, where it should be.

One of my bags of Oxiliplatin as it drip, drip, dripped its way into my arm.

The calculation for the amount of medication needed is based on the surface area of the body. This calculation is made on the basis of weight and height. There are concerns that it’s not the most accurate method of calculating dose. Something that I would come to understand later.

So, I sat there for 2 full hours as the medication dripped its way into my system. Expecting, at any second, for the most common side effect, nausea, to kick in. But it didn’t. I felt fine. Starting chemotherapy for bowel cancer was far easier than I’d dare hope.

For the first hour, all I could feel was a little cold in my arm above the cannula. Over the course of the second hour, I started getting twinges in my arm. First at the elbow and then up towards the shoulder. Nothing painful, just a little unpleasant. And then, faster than I could believe was possible, I was done.

I was told to wait 10 minutes before going home, in case there were any side effects. But there weren’t, I felt fine. Giddy, almost. After all the concern about feeling sick and maybe even being sick, I strolled out of there like it was nothing.

And then we got outside. Which is when the weirdness started. The cannula point, on the back of my left hand became quite tingly and sore. And then, so did the point on my left elbow where the blood sample had been taken the previous day. And, by the time we’d walked the 300 meters back to the car, my whole left hand was throbbing slightly, in time with the swing of my arm as I walked.

Back at home, one of the more common side effects kicked in; adverse reaction to coldness. I had a tee-shirt on and walking from the car to home, a breeze caught me in the shade of the house and my arms immediately started tingling as a result.

Needless to say, this needed experimenting with.

I took a sip of milk from the fridge and it grated against the back of my throat. It didn’t take long to work out that anything colder than room temperature was uncomfortable to drink. I didn’t even have the bottle to try ice cream!

Running my hands under the cold tap was initially hilarious. It felt like ice water. Within a few seconds, however, it felt like the tips of my fingers were crackling with static electricity. Not painful but uncomfortable. And also fairly entertaining.

Later, when I was waving my parents off, sensibly wearing a jumper I might add, the breeze caught my earlobes. It felt like someone was holding ice cubes to them. It seemed like no extremity was safe, although I didn’t test that theory any further…

In terms of nausea, by the end of the night I was feeling a little queasy, but I resolved that with Gaviscon. The only other related issue was that even the thought of sugary or greasy food left a sour taste in my mouth. The information I’d received from the hospital, about starting chemotherapy for bowel cancer, actually recommended eating flavourful foods. To keep the taste buds going. But I had to go the other way and stick to plain, simple foods to avoid nausea.

But, for me, starting chemotherapy for bowel cancer was a relatively painless process. It didn’t stay that way but it was nice while it lasted. 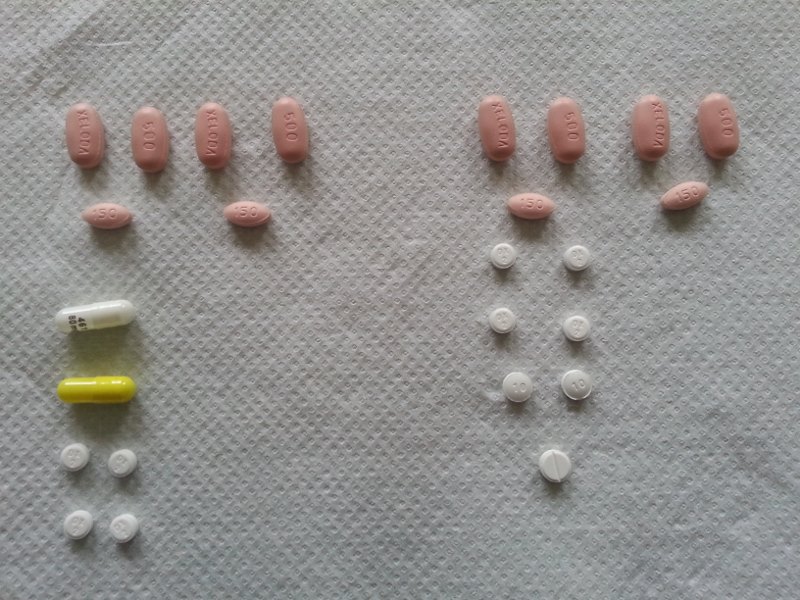 One day’s worth of Capecitabine tablets, plus ancillaries

I also had to take the Capecitabine tablets for the next two weeks, to finish the first cycle. But that, by and large, was just a case of taking the right tablets at the right time. There were other side effects that went with them but I’ll cover that more when I talk about the side effects of bowel cancer chemotherapy.

The Side Effects of Chemotherapy for Bowel Cancer