After a bit of an emotional roller coaster ride, following the announcement of my third recurrence of bowel cancer, it turned out that surgery was an option. Which was fantastic news, as far as I was concerned. It was decided that the metastasis in my lung was indolent, or lazy, so the liver surgery for my third recurrence would be done first.

This was fine by me. I was used to liver surgeries and, with the exception of the most recent one, I tended to recover pretty well. So, off I went to meet the liver surgeon in Bristol. The following conversation can probably be best summarised by the FaceBook post I made afterwards:

“Met with the liver specialist up in Bristol, earlier, and he’s going to try and fit me in for an operation in 3 or 4 weeks.
Yaaay!
I asked him if he wanted me to lose weight. He said he did. I asked him how much, and he said; “Um, all of it…!”
Booooo!”

With regard to the weight issue, the surgeon explained that it didn’t really make the surgery any more complicated. He would be using laparoscopy for which, as ever, there was about a 2% chance of not waking up. No, the problem came during the recovery phase. Apparently, extra weight increases the chances of things like clots and pneumonia. Given how well I tend to heal, though, I like to think that if I was skinny, I’d heal like Wolverine! Frankly, I wasn’t too concerned.

The day before this meeting, I actually made my first Cancer Dad post. Julie had persuaded me that I needed something to focus on while I was progressing through this latest recurrence. I was doubtful at first but it turned out she was right (as usual*). I had been desperate to get my cancer experiences down for quite some time. My hope was, once I had, they might help others in a similar situation. Julie’s idea worked so well, and I’ve posted so often, that I’m nearly up to date… I’m not sure what I’m going to write about in the New Year…?

[*Julie proof-reads my posts and made me write this…]

I also started making regular Chubby House Hubby posts in the same week; mainly so I wasn’t solely focusing on reliving my cancer experiences, and becoming depressed as a result. Despite all the potential for emotional upheaval, the promise of liver surgery for my third recurrence, along with regular blog posts, put me in a pretty stable mindset. Something I’ve largely managed to maintain all year. For anyone who is dealing with something like this, I heartily recommend giving blogging a go. It really does have a cathartic element.

I managed to get myself down to 18 st 4 lb (256 lb, 116 kg) by 2nd May, the date of the operation. This wasn’t as low as I’d hoped but I’d been doing a lot of walking with the girls, to help them prepare for various events, meaning I couldn’t do an all-out diet. Well, not and make it round the hikes we were doing…

Still, it must have been plenty good enough, because I was in and out of the hospital in no time. This was me, after the operation:

Me, after the liver surgery for my third recurrence, not in the slightest bit surprised to still be alive…

Actually, the livery surgery for my third recurrence  was something of a novelty for me: I was the first on the list. I tend not to get early surgery times and it was nice that I did, because it meant I got to spend the whole day recovering. Which was just as well, because I got virtually no sleep, in the high dependency unit, during the night.

Before we get there, though, I’d like to recount the tale of how, on the surgeon’s instructions, I was made to sit in a chair for 45 minutes. Just a few short hours after the surgery…

To be fair, there were very good reasons for this; not least, to prevent the formation of another bout of pneumonia. Which worked a treat, by the way. And while it was sore and uncomfortable to sit for so long, so quickly after the liver surgery for my third recurrence, that’s not the point of the tale.

The reason I mention it is that I was still hooked up to my urinary catheter. To get from laying in the bed to sitting in the chair involved a very slow motion pirouette, on my part, to avoid snagging the catheter tube. Once I was sitting, it was fine. Except when a nurse came to check on me. In which case, the nurse actually had to step over the tube to get to me. Nothing focuses your attention quite like a nurse being a simple stumble, or misstep, away from standing on your catheter tube. And the agony that would follow. I wasn’t disappointed to get back into bed!

Not that I was able to sleep. As the entry from my journal explains:

“I had an arterial line in my left wrist that set off alarms if I didn’t keep my hand just so. In addition to that, I had the inflating stockings on my lower legs all night. I had the clip on my finger for the blood oxygen. Wires to my chest for the ECG type thing. Oxygen tube to my nose. An IV line in my left hand. An IV port on my the inside of my left lower arm. Oh, and a catheter.

By the end of the night, it was safe to say that I wasn’t rested”

In the morning, I was moved to my room and the various attachments were removed during the course of the day. The more the tubes and wires that were removed, the more mobile I became. And I needed to be fairly mobile because of the referred pain in my shoulder. Keyhole surgery involves inflating you with nitrogen. Most of this is removed at the end of the surgery but some, inevitably, remains. The nitrogen rises and pools on the underside of the diaphragm, where it causes irritation. This irritation is expressed as pain in the left shoulder. And quite a sharp pain it is too. It only lasts for a couple of days and the best way cope is to distract yourself with other things. In my case, visitors and being as mobile as possible.

The surgeon came to see me during the morning and he told me how things had gone. The first thing was that the stickiness, or possible adhesions, left over from previous surgeries had worked to our advantage. The top of the liver was sort of ‘glued’ to my abdominal wall. So, when my abdomen was inflated, this pulled the liver away from my other organs. This was ideal, as the tumour was on the underside of the liver and this exposed it perfectly, and allowed the surgeons to do this: 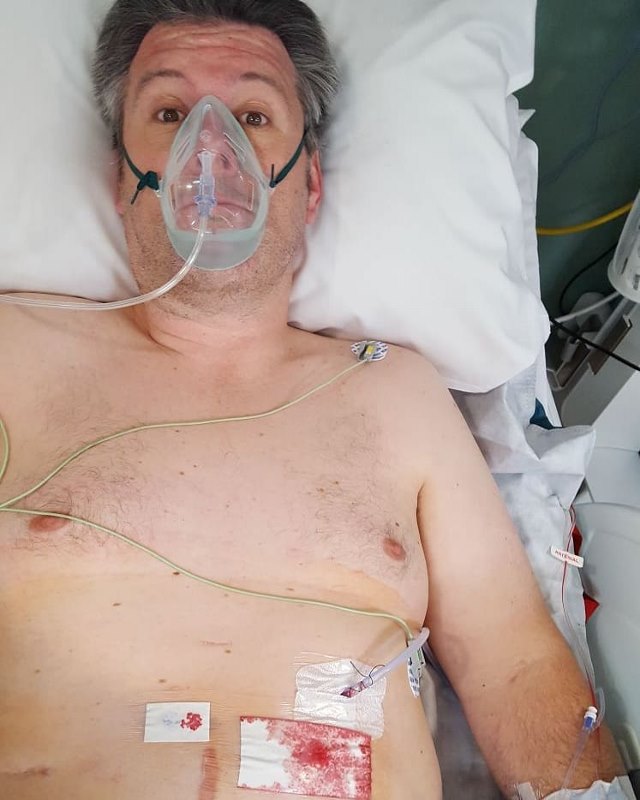 This was taken during the liver surgery for my third recurrence.

“So, the carnage to the right of the image is the bulk of my liver, from which has been hacked the offending piece.
The chunk at the center of the bottom of the image, is the bit that’s been sauted off.
This piece was scooped up in a bag, that emerged from the endoscope, and was hauled out as the probes were withdrawn.”

I know that it’s pretty graphic. But it’s also pretty amazing. This life-saving surgery was done in such a way that I only ended up with three small scars on my belly. It mustn’t be taken for granted how well I was taken care of during and after the liver surgery for my third recurrence of bowel cancer. It was so well done that a little more than 48 hours after this image was taken, I was resting at home. Modern medicine is wonderful, as are the people who perform it.

And if you think the image is disgusting, wait until you read this next bit…

During the the liver surgery for my third recurrence, my surgeon found a couple of strange, ‘green and brown bits’, which he sampled and sent off for analysis. He speculated, and was later proved to be correct, that these odd-coloured bits were indigestible cellulose. You see, what happened was; when my bowel ruptured, back before my bowel surgery in 2014, I was left, well, full of shit! The surgeons cleaned this out as best they could at the time. But, as it turned out, not perfectly. There are probably still bits of celery stuck to my pancreas as I type…

But, aside from such ickiness, I was fine. So much so that the surgeon had all the remaining attachments removed, except the abdominal drain and an IV port in my arm. He said that, unless something went wrong, I’d be able to go home the following day.

The recovery from my liver surgery for my third recurrence was going swimmingly.
Photo by Grégoire Bertaud on Unsplash

So during our meeting the following morning, he signed the papers to release me back into the wild. The drain and the port were removed. I had a shower, because I needed one. I ‘moved my bowels’, because the nurses tend to be reluctant to let you go home until you do. And Julie took me home. The liver surgery for my third recurrence was officially a roaring success.

“He said that he needed to avoid cutting out big chunks of the liver, for as long as possible, in ‘cherry-picker’ cases like mine. Because losing a big portion of the liver limited the options going forward. And you can only afford to do that a couple of times before surgery stops being an option.”

Which, to be honest, was a little scary. Something of a wake-up call to my situation. Yes, I’d coped well with the liver surgery for my third recurrence. But there were going to be more recurrences. And more surgeries.

I had a meeting with my oncologist the following day, which cheered me up again. She’d found me a lung surgeon and I’d be meeting him in due course to discuss the procedure. The lung surgery specialists were also based in Bristol, so I’d be back off up there to see him. In the meantime, the oncologist had ordered up a lung function test, to establish my pre-surgery levels. She’d also ordered another PET/CT scan to see how I was getting on.

I didn’t know it yet, but that PET/CT scan was going to cause me a lot of grief over the coming months. Or, rather, what the scan revealed would.