After the news that my cancer had come back for the second time in a year, since my original round of surgeries, it was decided that I’d be going back on chemotherapy. Not the stuff that is designed to cure you, like I was on last time. No, this time I’d be going on the palliative chemotherapy for bowel cancer. The stuff they give you to keep you going as long as possible, without ever curing the cancer.

I learned that I would be treated with this palliative chemotherapy during a consultation with my oncologist on 24th February 2016. I was also told that the date of the first dose was scheduled for Monday 14th March. Even with the Leap Year, that was only 19 days later. On the one hand: yay! They were getting the treatment started really quickly. On the other hand: crap! That’s not a lot of time. I’ll let my journal explain what I mean by this:

“Last time I was on chemo, I lost an awful lot of my higher mental faculties; I was pretty thoroughly dumbed down.

This makes me feel that the dying process starts on the 14th. Once I start chemo, part of my intellect dies and will almost certainly not return. In a way, the me that I am now, the me writing this, dies on Monday 14th. Scary!”

This wasn’t the case but it really could have been. The case in point is that I wrote that down on Saturday 27th February 2016. I recorded two more entries in the following two days. The next entry after that was on Friday 6th January 2017. Almost a whole year later. The gap is due to a combination of chemo brain and depression. Fortunately I still have a record of the social media posts I made during that time, as well as all the medical correspondence and documentation. But, had things gone a different way, that could have been the third last thing I ever wrote in my journal.

I suppose the point that I’m trying to make is that if you’re keeping a journal or a diary, you really need to find a way to fight through this. In hindsight, the obvious thing to do was to task someone to make me dictate my thoughts twice a week. The difficulty here is; who I could get to do this?

I use my journal to vent my frustrations. Sometimes this is aimed at the people closest to me, which means I couldn’t ask my wife to do it. It would be too emotional for my parents or brothers. What you need is a sufficiently close friend, ideally one who can touch type. I didn’t have one of those, so I have a year long gap in my journal instead. Find that friend! 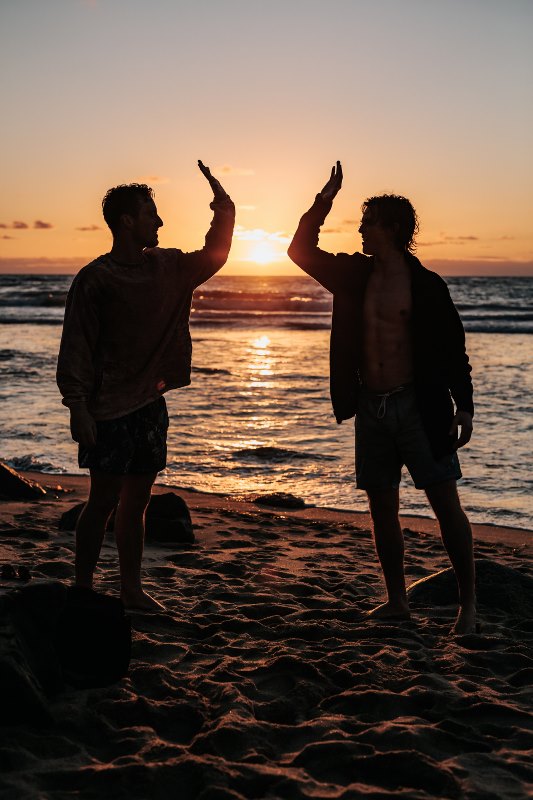 Finding the right friend is important. I mean, you don’t have to find them at a beach at sunset; but it helps…!
Photo by Tyler Nix on Unsplash

As it was, I wasn’t in much of a mental state to write much in my remaining 19 days, anyway. For a start I had a heavy cold, which muffled my thinking. For another, my depression had become edged with desperation. I’d been told that I had two to three years left to live. I anticipated that much of this remaining time would be spent either on, or recovering from, chemotherapy. Which meant I’d spend the majority of my remaining time crippled by nausea and addled by stupidity.

To my thought process, this meant that I had about two weeks left where I would be competent and capable of putting my affairs in order. And I was losing that to a sodding head cold. I was not a happy bunny!

It’s probably just as well that the chemotherapy started when it did, rendering me a half-wit and easing all these troubles from my mind. Much more of that and I’d probably have popped. And that would have made a hell of a mess… do you know how difficult it is to get viscera out of suede upholstery?! Me either, but I bet it’s not easy.

Which brings me on to my chemotherapy. Last time Oxaliplatin and Capecitabine were administered in cycles that lasted three weeks. There were four of these cycles and then a break for surgeries. After I’d recovered from my operations, the whole process was repeated. The Oxaliplatin was administered intravenously, at the hospital, through a cannula in the back of my hand. The Capacitabine was taken in oral form at home. The Capacitabine tablets were taken daily for two weeks, then there was a week to recover. And repeat ad nauseam…

Get it? I’m using the literal translation in the figurative sense… Oh, come on! This stuff is gold.

Anyway, for my palliative chemotherapy, just about everything would be different. For a start, I needed a PICC line. A PICC is a Peripherally Inserted Central Catheter. This basically meant that I was going to have a tube pushed up a vein in my arm, all the way round to just outside my heart. And this tube, this catheter, would stay in place for the duration of my treatment. Which would be at least six months.

There are very good reasons for having a PICC line:

If it sounds too good to be true, there are also a number of drawbacks:

I learned all this in the PICC care lecture that I had to attend. I was also given a pamphlet entitled, ‘Understanding your PICC Line’. Yeah, I understood it, all right; it was going to make me a right fat bastard.

The PICC line went in on Wednesday 9th March 2016. It was a really interesting procedure, done under local anaesthetic. Which was important, because it meant I could get photos. 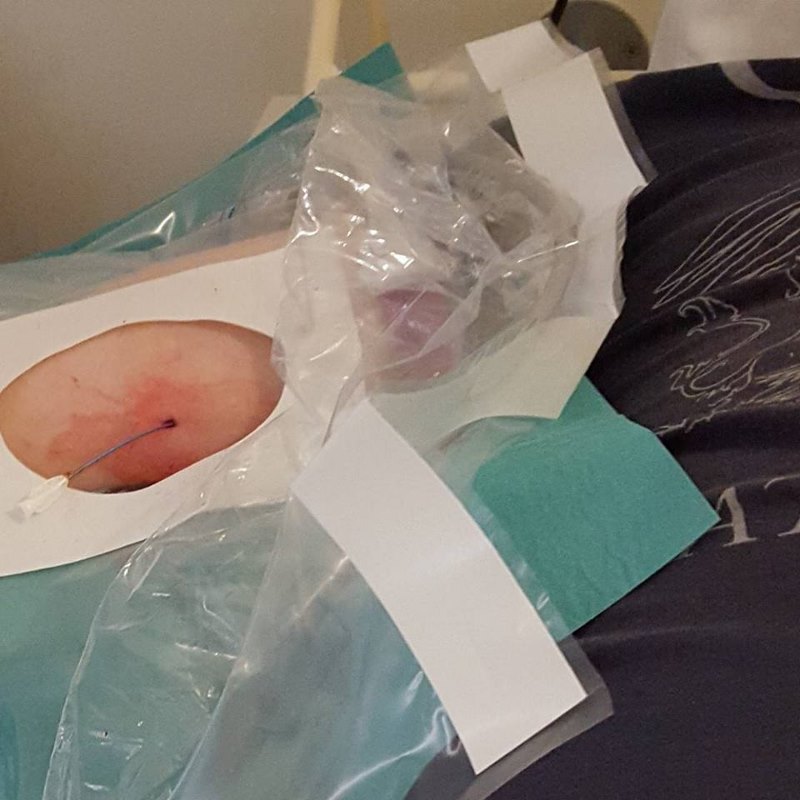 My brain, however, remained safe and the line was fed in until the nurses estimated it was close to my heart. They wanted the end to sit in the Vena Cava, a comfortable distance from the right atrium. They certainly didn’t want it so close that it interfered with the Tricuspid Valve. Which is why the PICC line had a metal tip: so it would show up in an X-Ray. Which is what the nurses sent me off to have done.

On my return, and after a look at the X-Ray results, they decided that the Line was in slightly too far. So they pulled it back out a little bit. And that felt weird. The length of the PICC line is marked and numbered, so everyone knows where they are. This number is recorded and checked each visit to see if the Line has been displaced. And, if so, whether it’s by a sufficiently big margin to require it to be replaced. Thankfully, that was nothing I ever had to worry about.

So, with the line in place we were told we’d need to come back each week to have it re-dressed, unless someone at home was willing to take on that task… pregnant pause… Julie, of course, volunteered to do it. As, I’m sure, virtually all partners would.

Changing the PICC dressing is a wasted trip to hospital and, potentially, hours out of your day for something that could be done at home. The hospital staff certainly had better things to do. Besides, Julie used to be a Medic in the Territorial Army; it’d be like a trip down memory lane for her. So, we were given an impressive bag of supplies so that Julie could clean and then re-dress the wound. Although it would be a month before the chemotherapy care nurses deemed her trained enough to do so.

Providing med cover for the Ten Tors event, on Dartmoor, in 1994. See, Julie was a medic.

With the PICC line in place, in was just a case of knowing what form my palliative chemotherapy would take. I knew it would be different from last time, but I was surprised by how different it was.

Firstly, there were three chemotherapy drugs involved, instead of the two. This was explained to me as follows:

“So the new chemo is Irinotecan with Fluorouracil (5FU) and Folinic Acid. These last two, together, are known as FOLFIRI.

With the chemo, I will also be getting an additional treatment of Monoclonal Antibodies called Cetuximab.

With the FOLFIRI, I can expect to lose my hair. All of it. From everywhere! With the Cetuximab I can expect nuclear powered acne.

Furthermore, the palliative chemotherapy would be administered on a two-weekly cycle, instead of the three-weekly cycle I’d experienced previously.

There was also going to be a pump involved…

The way palliative chemotherapy was administered started off in a familiar way. I had to have a blood test the day before the treatment, to ensure that my blood markers were within the appropriate limits. I then attended hospital and the Cetuximab and Irinotecan were delivered through an intravenous drip. Except this time, the ‘drip’ was through my PICC line. After that there was a ‘Push’ dose of 5FU before the pump, which was chock full of more 5FU, was attached to the PICC line.

The pump, as it turned out, was not what I was imagining. It was in no way motorised and was like a miniature flying saucer of nausea. Just thinking and writing about it this much is actually making me feel nauseous…! 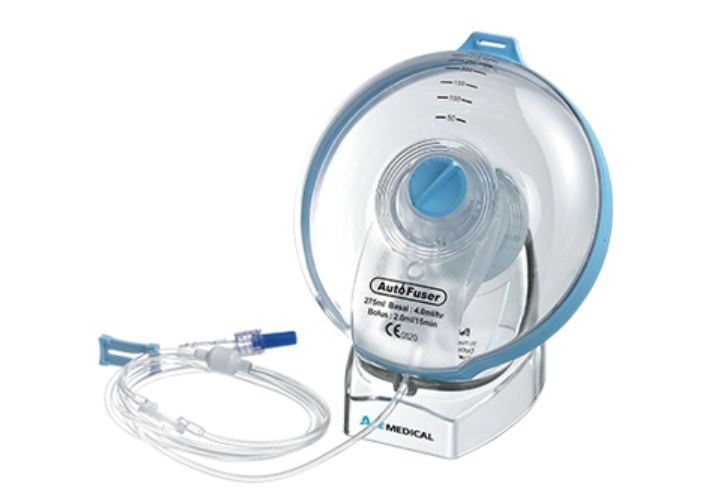 The type of pump used to administer the bulk of the 5FU aspect of my palliative chemotherapy.
This version being being the AutofFuser by Ace Medical.

The pump would stay in place for 48 hours, while the elasticated torus of joy, contained within, slowly squeezed the medicine from Hell into my heart. When the 48 hours was done, it was back to the hospital to have the pump disconnected. These trips were always particularly rough… Yep! Feeling sick again, at the memories.

After the pump was removed, there was 12 days to recover before the cycle started again. 11, really, if you count going in for the blood test.

Anyway, because these were given on a two-week cycle, there would be 12 of them to make up the six month course. And, because this time I had no surgeries planned at the three month point; the treatments would run right through.

12 of these things over a six month period was not something that I relished. How it actually went, will have to wait for next time. Rest assured, I’ve got some photos that you’re going to love!