In October 2015, on the evening before the stoma reversal surgery to get rid of my colostomy bag, I received a call from my bowel surgeon to tell me that my last CT scan showed a shadow on my liver. I was told that this shadow could be my first bowel cancer recurrence, albeit in the form of a liver metastasis. Or it could be nothing. Oh, and did I want to go ahead with the surgery tomorrow…?! 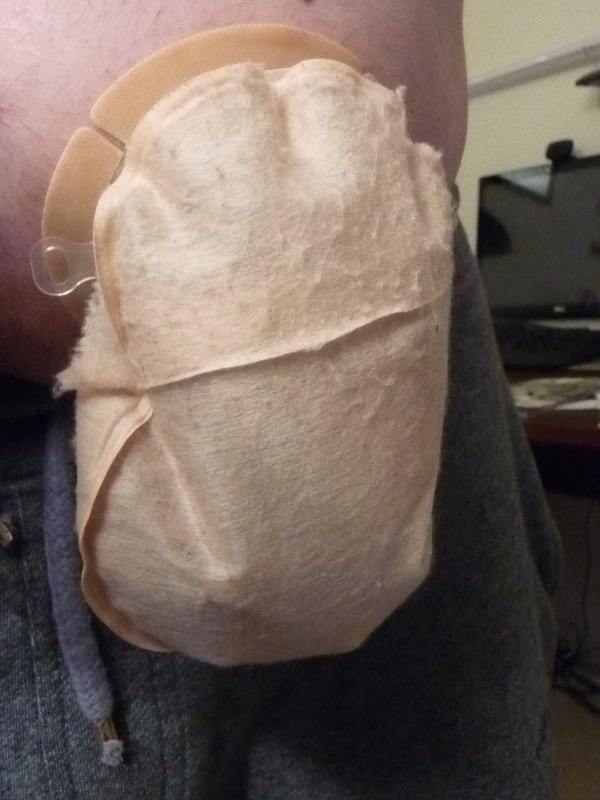 My colostomy bag in all its annoying glory.

Logically, the answer was obvious; get rid of the colostomy bag. Have one less thing to worry about. Go ahead with the surgery.

I cancelled the surgery.

I think my decision surprised me as much as it surprised the bowel surgeon. But, for once, I was trying to think long term. If it was my first bowel cancer recurrence, then delaying treatment, even for a short delay, could have negative connotations about my long-term survival. And, if it was just some random shadow, then I could re-book the reversal surgery pretty quickly.

The thing that swung the decision, though, was that after the reversal surgery, I’d likely still be stuck with an ilesotomy bag. And, if not that, it’d still take quite a while to get used to going to the toilet the old fashioned way again. Either of which could involve much more than a ‘short delay’ in dealing with the shadow on my liver, which could very well be my first bowel cancer recurrence.

Even through the Citalopram, my decision had a negative impact on my state of mind and worsened my depression.  The second guessing started almost immediately and the date of the MRI Scan didn’t help. The scan was booked for October 18th, virtually two weeks after when the surgery would have been.

The wait after that scan was particularly excruciating. In some ways it was much like the wait I’m going through now; the results are going to be a game-changer, one way or the other. This wait sucks. The one in October 2015 was the first of its kind, and, consequently, so much worse.

Particularly when the waiting ran into November. I was really struggling by that stage. So much so that on Tuesday the 2nd November, I actually called the Colorectal Department at the hospital to ask what was happening. I spoke to one of the Colorectal Nurse Specialists and virtually begged her to tell me what was happening. We both knew that my case had been discussed the previous day at the Multidisciplinary Team (MDT) meeting, so she looked me up on the system…

She told me that, while there were no certainties at this stage, the Radiographer had looked at my MRI and was of the opinion that he was looking at cancer again. The reaction I recorded in my journal to the news that I likely had my first bowel cancer recurrence was as follows:

“When I heard, my skin lit up like it was burning for a few minutes. I vaguely wondered whether I was going to be sick but I managed to keep my voice normal.”

What my first bowel cancer recurrence looked like. The white bits are the liver metastases.

Two of them, it seemed.

While there was no guarantee they were tumours, I’d need a PET/CT to confirm that; it was likely enough that I needed to tell everyone. It was like being right back at the beginning again. The same place I’d been the previous year, when I’d had to tell everyone about my diagnosis. Doing so wasn’t any easier, as my journal can attest:

“Julie, the girls and Mum and Dad are pretty crushed by this. To some extent, we were all expecting it but to actually have it happen again is tough. They don’t need this crap in their lives and I can’t help but feel guilty for putting them through it again.”

I’ve included the last sentence because I think it’s important for anyone having to deal with a similar situation.

People with cancer can feel guilty about it.

Of course, this isn’t necessarily the face you show the World. My FaceBook post on 3rd November was:

“Turns out they don’t make ‘cancer free’ like they used to! I now have two, possibly three, shiny new tumours on my liver but won’t know more until next week.

For those who were just glad there weren’t going to be any more amateur dramatic, attention-seeking posts; buckle up, it’s a brand new ride. 😁”

Not every cancer patient will experience guilt. Many cancer patients can simply be as angry at the cancer as their family and friends are. But for those who are feeling guilty, you’re not alone and it’s okay to talk about it. And talking about it helps.

By the time the PET/CT scan rolled around, it was 17th November; around six weeks after the scheduled date of the reversal surgery. Enough time to have dealt with an ileostomy bag and re-plumbed bowels. I know everything is easier with hindsight but it made for a pretty low emotional state for when the scan results came back on the 25th.

Yep: it was cancer.

Because, sometimes you need cheerful aside…

I’d had my first bowel cancer recurrence and I needed to go to Bristol to talk to the Liver surgeon about my options. The options included:

The latter option involving varying combinations of chemotherapy and radiotherapy (immunotherapy wasn’t a thing yet). It wasn’t a pleasant car journey to Bristol.

I know I appear to be dwelling on this but only because the impact your first bowel cancer recurrence has on you is immense. The previous year I’d been told I had cancer. I’d spent most of the rest of that year being treated for it. April of 2015, I’d been told I was cancer free, and to get on with my life. Now, six months after that, I was back to square one. It’s not an easy time and anyone heading into similar territory needs to prepare themselves accordingly.

Anyway, back to my meeting with the liver surgeon. He opened with the news that there were two tumours and that they were both operable. Which, as I’m sure you can imagine, was a huge relief. He didn’t know whether there would be chemotherapy after the surgery, because that was a decision that would be made by my oncologist back in Taunton.

According to my journal, the liver surgeon explained that:

In practical terms, this meant that one tumour was under the floating ribs on my right side and the other half way between my right nipple and Solar Plexus. During the [recent exploratory] surgery, [the liver surgeon] had also biopsied from lobe 3.”

None of this ‘lobe’ talk made any sense to me, so the surgeon did a nifty little sketch, which allowed me to look up a diagram when I got home: 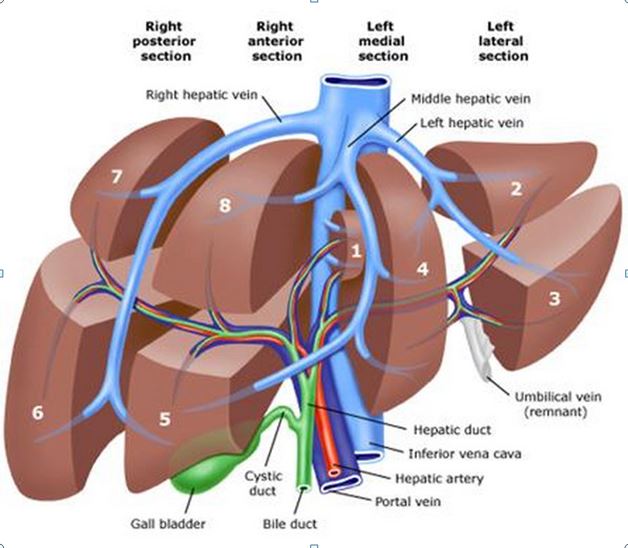 What the sketch translates into.

The next bit of good news was that the surgery could take place on the 5th December. Not too far away but with enough time to get back home for my daughter’s birthday on the 11th.

And we’ll see how well that plan worked out in the next post.

As it was, I was able to take the news home that the tumours were operable and would be dealt with nice and quickly. I noted this in my journal as follows:

“In telling everyone afterwards, the main response was one of happiness and rejoicing. Which I understand from the point of view of ‘not dead yet’.

But I seem to be the only one grasping the fact that I’m likely to spend the next couple of months being operated on and recovering from that and then the six months after being poisoned by Chemo. And THEN the nine months after that getting my mind and body back into shape. Hopefully, at which point, I can finally have the stoma reversal.

Basically, if all goes well, a year from now I should be back to the position I was two months ago.”

My first bowel cancer recurrence was, mentally and emotionally speaking, another very difficult time for me. In some respects, it’s more difficult with a recurrence because you’ve already had to put so much of yourself into getting rid of your cancer. And then it comes back. In my case, indecently quickly. It’s a tumultuous time.

Physically speaking, however, things were… actually, pretty tumultuous as well. But that’s a story for another time. Next time, in fact.

Chemotherapy After Surgery For Bowel Cancer