Please note that bowel cancer survival rates improve all the time and that this was written in April 2018, and refers to my experiences in Spring 2014. Things may well have moved on.

As mentioned in my previous post, not everyone wants to learn about the survival rates after they have, or a loved one has, been diagnosed. Please be sure that you really want to know, before going any further, because some of it isn’t easy reading.

There are a number of systems of classifying tumours, and bowel cancer survival rates are based on these systems.

Before I delve into the bowel cancer survival rate statistics, I need to make clear that the statistics are based on the population as a whole. Factors like, age, gender and preexisting conditions have an impact but, whatever your situation; you can improve your odds.

Photo by Alex Chambers on Unsplash

Take for example, a 5 year survival rate of 50%. That means, that on average, 50% of people will survive to 5 years. The fitter, healthier and more active you are, the more likely you are to be in the half that survives to 5 years.

And it’s never too late. There is always time to lose a bit of weight and do a bit of exercise. The more physically healthy you are, the more you improve your survival rate.

There are a number of sites that give figures for survival rates and I’ll list some of them, below. The figures cited by these sites are not identical but they’re close. Without getting too involved in the meanings of the stagings and gradings, which I’ll cover at a later date, I’ll use the figures from Wikipedia.

There are two reasons for this. Firstly, the figures have a code reference to cover virtually all of the classifications so, if you’ve had a diagnosis, you should be able to find it. Secondly, it’s what I found most useful when I was first looking:

That is an impressively wide range. There is a 100% 5YSR for something like a polyp. 90% if it’s caught before it gets too deep into the wall of the bowel. Still 70% even if it does get deep into the bowel wall. All this shows the importance of catching the disease early. Which emphasises the necessity of being familiar with the signs and symptoms of bowel cancer.

But it’s when the cancer gets outside the bowel that things start getting really tricky. The bowel is surrounded by a network of lymph nodes, if the cancer reaches these, then your chances of surviving 5 years dip below the 50% mark.

If the cancer has metastasised to another organ, then long term survival drops below a 10% likelihood. This is where I was after my initial diagnosis, and it’d not a nice number to be faced with.

On the other hand, if the metastasis is in the liver and if it is surgically removed, the 5YSR increases to 25-40% again. Which is where I ended up after all the scans were done and I was given my full diagnosis. 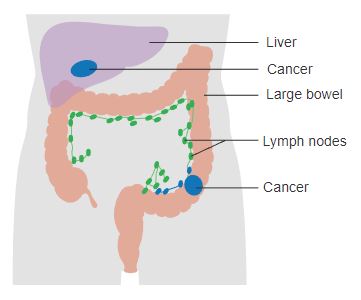 My own full diagnosis went like this: an adenocarcinoma at the rectosigmoid junction, that was found to be perforated at the time of surgery, and was staged as a Duke’s C1, pT4b, N1 (1/25). There was no evidence of extramural venous invasion and it was moderately differentiated.

And, no; I still don’t know what half of that means. And I don’t see the point of getting hung up on it.

The facts are this:

What I’m trying to say is that it’s more important to listen to what your oncologist is telling you, than to focus on the statistics of bowel cancer survival rates.

But the most important thing is that, regardless of where you find yourself, you can improve your chances by diet and exercise. Get yourself as fit as you’re able, however much that is, because it’ll extend your life.

Any exercise is good exercise. Photo by chrissie kremer on Unsplash

If you still want to look into bowel cancer survival rates, there are some sites that offer survival calculators. I can’t vouch for their accuracy but my surgeon referenced one during one of our meetings, so they must have value: